How to Commute by Electric Bike?

The choice of a foldable or non-foldable bicycle depends on the traffic conditions in your city. If the traffic in your city is congested during peak hours and your city allows collapsible e bike, then folding bicycles are the recommended choice. If the commuting distance is relatively long, you need to take public transportation before riding a bicycle, or parking is difficult or expensive, then electric folding e bikes are also a good choice. But if the traffic in your city is not too crowded during the rush hour, and you don’t need to transfer halfway, then a full-frame electric bicycle is a better choice. Electric bicycles will save effort and make your commute process more relaxing and enjoyable. How Far Can You Ride an Electric Bike?

Ordinary people can commute 5 to 10 kilometers on electric road bikes every day. If you usually have enough exercise, you can also ride an electric bike to commute 50 kilometers a day.

How Long Does It Take to Charge the Battery?

Urban electric bike batteries generally take 4-6 hours to fully charge, so it is recommended to bring the charger when commuting. Or we can buy multiple chargers, one at home, and one charger at the company, which is convenient for us to charge the electric bicycle, which is also cheaper than buying a second battery

The Speed of an Electric Bicycle? 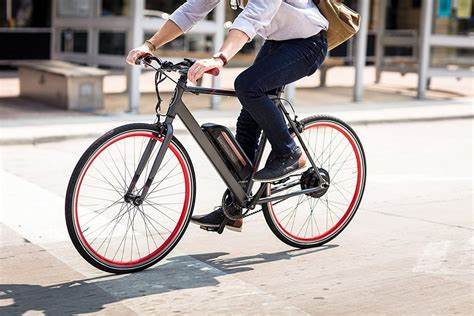 The Weight of an Electric Bicycle

Electric bikes are definitely heavier than ordinary bicycles, generally weighing between 50-60 pounds. The power and range of lightweight electric bikes on the market are usually lower, because the battery and motor itself are the main reasons for the increase in weight, and the speed and range will naturally decrease as the quality is reduced. Therefore, we need to make a choice between light weight but shorter power and range and heavy weight but longer power and range. If we have a short commute or need to move the electric bicycle upstairs, then a light electric bicycle is a better choice. If the commute distance is long, or we need to carry some heavy objects, then a more powerful electric bicycle will Is a better choice

If you are looking for a healthy and environmentally friendly way to work, affordable electric bike is an excellent choice compared with traditional bicycles, public transportation and motor vehicles. You can also integrate electric bicycles into any of the above vehicles to maximize efficiency and minimize commuting time.